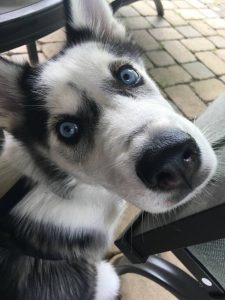 A gorgeous 8-week old husky with piercing blue eyes by the name of Frankie was brought into the veterinary hospital in severe respiratory distress; he was gasping for air and was very close to death. Frankie was one of a large litter of husky puppies that were in the care of a breeder. Unfortunately, the breeder didn’t have the means to pay for Frankie’s diagnostics. Healing Haven Animal Foundation agreed to take Frankie in and find out what was causing his severe symptoms.

It was found that Frankie suffered from congenital laryngeal paralysis which made it difficult for him to breath and swallow. We immediately facilitated the urgent care he needed in order to stabilize him. To improve Frankie’s chances of having a successful surgery, he remained in foster care for a couple of months so he could grow. Once we felt he was ready, the surgery was performed successfully. Frankie is now breathing well and is a happy, healthy husky, who was recently adopted by his foster parents.