Hulk the Pit Bull – Unwanted and Gasping for Air 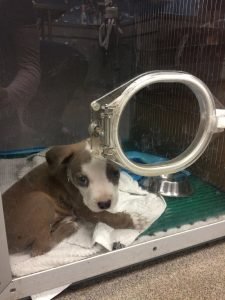 A tiny 8-week-old grey and white pit bull was brought into the emergency clinic because he couldn’t breathe. The owner handed him across the desk to the receptionist and said, “I don’t want this puppy! He is too much trouble!”

Healing Haven was called and we immediately agreed to take on full responsibility for the puppy. He was first placed in oxygen to try to stabilize his breathing. Once he became a bit more stable, an x-ray was taken which revealed a diaphragmatic hernia which was likely congenital. His entire intestinal tract was sitting in his chest–so it was no wonder that he was struggling to breathe. We immediately decided to give him a chance and take him to surgery. Despite the odds, he came through surgery like a champ. This little guy has been fighting for his life since he was born. 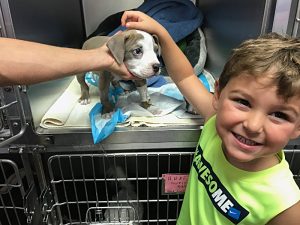 After several days of supportive care and pain management he was ready to go to a new home. One of the nurses at the hospital fell in love with him. She had been looking for a puppy for her young son, who, upon meeting the pup, named him Hulk after his favorite superhero. Today, Hulk is finally getting to experience health and love for the very first time. We’re happy to have been able to give him a second chance at life.