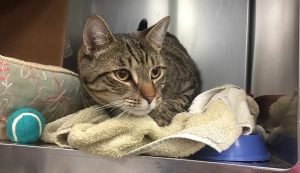 Timmy was brought in to the animal hospital for severe symptoms associated with vestibular syndrome. He was unable to walk, he had a head tilt, nystagmus (eyes rapidly moving back and forth), and vomiting. He was in terrible shape when he arrived. His owner approved all of the care necessary to treat his symptoms and to try to figure out the cause.

Timmy responded to treatment and his symptoms slowly improved. His owner took him home but unfortunately returned a couple of days later to euthanize him. His owner was too distraught to handle his slow recovery and feared that he would have a relapse when he wasn’t at home.

When I arrived for work I saw Timmy there for euthanasia but I wasn’t willing to give up on him yet. I called his owner and asked if Healing Haven could take him on and give him a second chance. He was very grateful and immediately signed him over to our organization. Timmy has fully recovered and we can now see his beautiful personality.